Thanks to the “gentlemen” at @PhoulBallz for the news on Kyle Simon:

I’d like to see this nutty guy in the majors at some point.

These keep me sane while I’m studying for finals. Translation: I know I’m okay because I would never agree with any of this.

TROLLING OR NOT: IS CHOOCH TRADE BAIT?

I’m pretty sure these Phillies fans are serious. Thanks to @hiphop_jorge for bringing these to my attention. 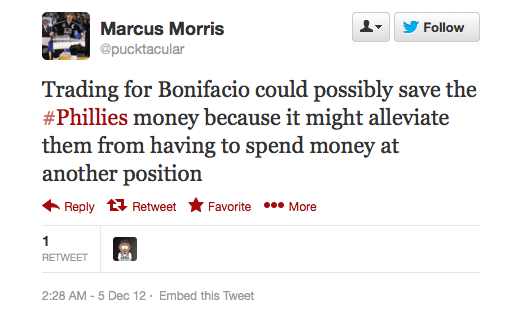 The St. Louis Cardinals, last year’s World Series champions, were dumped by the Giants in a (not so) thrilling game 7 two nights ago. And the Cardinals fanbase took it with class and maturity…or most of them did.

One look at the Twitter account @BestFansStLouis, and you’ll quickly realize that these really aren’t “baseball’s best fans” and that St. Louis isn’t “Baseball Heaven” like Scott Rolen once so famously declared. There are actually some pretty reprehensible people among the Cardinals fanbase, whose frustrations are usually tied back to someone being a “faggot,” “pussy,” or some random racial slur. One “creative” tweet I saw stated that “SF” stood for “super fags” and not “San Francisco.” Good one.

It surely doesn’t have anything to do with someone having a bad game or the other team playing better!

This account has easily been the best part of the postseason so far (except the baseball, of course)

As we all know, every team has ballbags like this as fans, and furthermore, the whole media narrative of the Cards having the “best fans” is utter bullshit. Their fans are no worse or no better than ones rooting for other teams. Sorry guys, you’re just not that special.

Among all of the retweets from @BestFansStLouis, I found a guy who made some particularly appalling comments – future lawyer Josh T. For starters, don’t most law students and attorneys lock their accounts? And beyond that, there’s your run-of-the-mill latent sexism on display, and of course, racism! But don’t worry, it’s ok, some of his best friends are black/Latino.

END_OF_DOCUMENT_TOKEN_TO_BE_REPLACED

Admittedly, I missed most of the action tonight since I was in class. I was sort of half paying attention to the O’s-Yankees game on my phone, but I had no idea what happened in the exciting A’s-Tigers game until well after the fact.

Let’s recap. With the Orioles leading 2-1, future Hall of Famer Raul Ibanez came in to pinch hit for always clutch New York Hero A-Rod. This is what happened.

And in the 12th inning, Raul did it all over again. So much for that vaunted Baltimore bullpen.

Meanwhile in Oakland, things were shaping up to be much more exciting. Heading into the bottom of the 9th, the Tigers led 3-1 with Jose Valverde on the mound, so basically game/series/season over for the A’s. But not really, because Seth Smith hit a double with two men on, making it 3-3.

And then a couple batters later, Coco Crisp lined a single into rightfield to win the game and force a game 5.

And to make matters worse for the Tigers, the clubhouse attendants had to tear down the plastic tarp in their locker room.

What a night. I wish I could have sat on my ass the entire day and watched all four games! Or at least the two exciting ones.

The O’s and A’s win tomorrow so we’ll be one step closer to having every baseball nerd’s favorite ALCS.

REALIGNMENT REVISIT: HOW THE PLAYOFFS WOULD LOOK IN MY ALTERNATE REALITY

Over the summer I asked myself the question, “How would MLB look if the divisions and leagues as we know them were completely destroyed in favor of a geographically-based alignment?” Here it is again if you missed it the first time.

Now that the season is over and yesterday was one of those real sad days without baseball, I decided to take a look and see who would be going to the playoffs if the real MLB records were applied to my realignment. I guess this is like fan fiction or something.

END_OF_DOCUMENT_TOKEN_TO_BE_REPLACED

It’s the last week of the season and not unexpectedly, the Yankees-Red Sox tilt has playoff implications. But this year it’s only the team from New York who will be playing deep into October.

With the Yankees heading into the night one game ahead of Baltimore (who won against Tampa Bay), they were hoping for another Red Sox rollover to keep the pressure on the Orioles. It wouldn’t be so easy though, as the game went into extras. 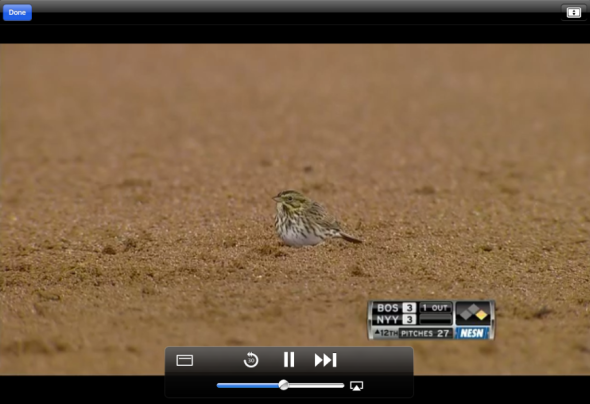 At a crucial point during the top of the 12th, the Yankee infield had a visitor, but this time it wasn’t a cat, squirrel, or streaker. It was Melospiza melodia, commonly known as the Song Sparrow. It spent a bit of time hanging Jeter and one of the umps, and then played some grabass with the Yankee Stadium crew member.

Looking straight into the camera’s eye.

Last night was time to say goodbye to CBP for the season. Some of us were sad, some of us were overjoyed, and others were drunk – like Jonathan Papelbon.

Although the Phillies still have a shot to make the playoffs, that shot should be filed under the “snowball’s chance in hell” category. Just win the next six games with the Cardinals losing the next six. Easy!

While Philly led the majors once again in attendance this year, they gave the home fans a shitty going away gift with a 7-3 loss. It brought them to 40-41 for their first losing season at home since 2000. A lot has changed since then, including the entire team except for Jimmy Rollins. Who were some of the other guys on that team? How about Tomas Perez, Desi Relaford (who has yet to respond to me on Twitter), Rob Ducey, Kevin Sefcik, and Rico Brogna, among many other gems. Also, Bruce Chen.

The good stuff tonight? Darin Ruf is now 5-for-12 as a major leaguer, including a first inning bases-clearing double (video below). It’s way too small of a sample size to make any kind of judgements, but with the Phillies out of it, there’s no reason he shouldn’t get another 10-15 at-bats to close out the season. Phillippe Aumont pitched pretty well, too.

See you guys on the road.

Although the Phils aren’t mathematically eliminated, they are logically eliminated. Despite all of this, tonight’s game was still a fun one to watch. Cole got his 16th win, and we saw two big bombs from some of the young guys.

To tie the game at 1, Double-A sensation Darin Ruf worked a full count and then launched his first MLB home run (also his first MLB hit). It was his 40th professional HR of the year.

And the silent treatment he received was epic, lasting until the end of the inning – a full three at-bats.

Not to be outdone, Domonic Brown destroyed another baseball.

I wasn’t a baseball fan until I was 7 or 8, mostly because I wasn’t exposed to it. My dad has always been a football guy – he’s never cared much for any other sports.

Sometime around when I was 6 or 7 a bunch of us were messing around on a baseball field sometime during or after school, and my buddy James shouted out that he was going to imitate Mike Schmidt’s swing. Never heard the name, so I asked who he was.

Apparently he was the third baseman for the Phillies – a team I only heard about in passing on the news. My household was all Eagles up to that point (well, mostly me) and Joe Montana (my dad’s favorite), but after a few nice hits, I was hooked on baseball. And I still am today.

But that’s probably too much background on how the Schmitter was my first baseball idol, and it’s only tangentially related to this commercial.

Schmidt has appeared in a handful of commercials, including ones for Chevy and PRISM, but this one for 7 UP could potentially be the corniest. Keep an eye out at :23 for the bottle that launches straight up from home plate. If only they actually had that in the majors! Derek Lowe would probably abuse it though.

The Sound of Philly
Create a free website or blog at WordPress.com.